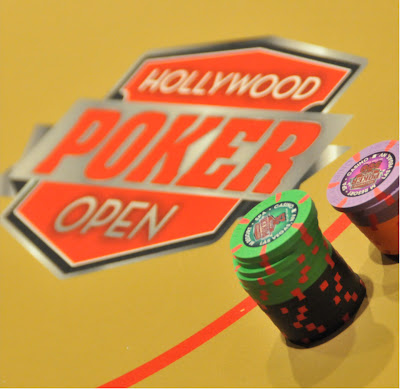 Las Vegas, NV (June 2013) – More than 150 professional and amateur poker players representing 16 Penn National Gaming casinos across North America are coming to Las Vegas June 27-29 for a chance at fame and glory to play in the $500,000 Guaranteed Hollywood Poker Open Championship at the M Resort Spa Casino Las Vegas. Up to another 150 players are expected to buy-in at $2,500 a seat for the Championship.

Among the participants are those who won seats at one of five regional HPO tournament events held at Hollywood Casinos over the last eight months. Others won local tournaments and seat giveaways this year at Hollywood and Penn National Gaming properties throughout North America.

Penn, which operates some of the largest and most comfortable live poker rooms at Hollywood Casinos in the Midwest, South and Mid-Atlantic, is looking to grow its poker business and introduce players to the M Resort as a poker destination.

“Our goal was to create a national tournament of our own where poker players – both those we know as well as those new to our casinos – could gain multiple opportunities to participate in regional and qualifying events with the action culminating in a championship in Las Vegas,” said Jay Snowden, Senior Vice President Regional Operations, Penn National Gaming. “We also wanted our players to know that they have a first-class poker home the next time they visit Las Vegas.”

The start time for Day 1 (June 27) is 11:15 a.m. The event is being held in the M Resort’s Milan Ballroom, Lower Level. Approximately 10 percent of the field will finish in the money.

No Limit Hold’em satellites and live action games will also be held throughout the weekend at the M Resort.

Players can pre-register online or register in person at the M Resort Poker Room. The HPO Registration Desk for pre and newly registered players is located on the M Resort’s Spa Level starting June 27 from 3 p.m. to 9 p.m. and beginning at 8 a.m. on June 28.

To learn more and follow the action throughout the weekend: