For the first time ever, a stop outside the U.S. will occur with the addition of River Rock Casino in British Columbia this October. Additional new stops this season include the aforementioned River Rock (October 27 - November 7); the brand new Horseshoe Cleveland (March 14 - 25, 2013); Foxwoods Resort Casino in Connecticut (March 27 - April 8, 2013) and Harrah’s Cherokee in Cherokee, North Carolina (April 4 - 15, 2013).

A WSOP gold bracelet will be on the line for WSOP Circuit grinders in a season-culminating National Championship event taking place at Harrah’s New Orleans just after the final Circuit stop, from May 21-23, 2013. With Southern Comfort on as the Presenting Sponsor, the WSOP will bring the nationally televised finale to where it all began – for both poker and Southern Comfort – New Orleans, Louisiana.

100 is again the magic number for the WSOP Series of Poker Circuit Events Presented by Southern Comfort 100 Proof. Fueled by a $1,000,000 prize fronted by the WSOP, the top 100 players from the Circuit tour who qualify via exemptions or at-large bids will free-roll into the National Championship to battle in the Big Easy against any of the 100 players made eligible based on their performances in 2011 and 2012 open bracelet events. As was the case in 2011, these players may buy-in for the equivalent equity, or $10,000.

The World Series of Poker Circuit Events Presented by Southern Comfort 100 Proof will begin August 9 at IP Biloxi in Mississippi with a 12-ring event schedule, with the Main Event set to begin on Saturday, August 18.

The tour continues almost non-stop through December 17, and then after a short holiday break resumes in earnest on January 3 and continues without break through May 20, 2013. Scheduling the National Championship immediately adjacent to the final event will create a “last shot” phenomenon that is sure to bring excitement to the Crescent City.

Once again a points-ranking system for all ring tournament participants will be used and reward those players who participate in multiple events – with the Top 100 players qualifying for the Southern Comfort 100 World Series of Poker National Championship (May 21-23, 2013 in New Orleans). There will be 40 automatic qualifiers, with 60 additional players qualifying based on their points earned on the circuit.

The “12 Rings in 12 Days” concept is back, with most stops beginning on a Thursday, and the three-day Main Event beginning on the second Saturday, thereby encompassing a total of 12 official WSOP gold ring events over 12 days, and offering players non-stop poker action at the regional level.
Each stop concludes with a $1,675 buy-in Main Event Championship slated to always start on a Saturday (except for Horseshoe Hammond, where the Main Event begins on a Friday). Also back, the Main Event’s will be played as re-entry, with a morning and an evening flight available to players. This year, the $1675 will be inclusive of all fees, with the full $1500 going into the prizepool. The concept of add-on chips will be eliminated at all stops.

Each WSOP Circuit stop Main Event winner will receive an automatic berth into the Southern Comfort 100 World Series of Poker National Championship. Automatic bids will also go to the “Casino Champions” at each participating venue. A Casino Champion is defined as the player at each stop whom accumulates the most points throughout the 12-event gold ring schedule.

“We’re coming off the best year of participation ever in the history of the WSOP Circuit,” said WSOP Executive Director Ty Stewart. “We think we have the best offering in terms of value and ROI at these stakes and the most exciting championship format out there,” added Stewart. “We’re thrilled to add a big-time marketing partner like Southern Comfort 100 Proof, who is a natural fit for this platform and will truly help grow the profile of the tour.”

All Southern Comfort 100 World Series of Poker Circuit Event stops will feature standardized tournament structures and payouts. So players going from stop to stop will be treated in a consistent manner at each of the stops.

The 2011-12 WSOP Circuit Tour featured 17 stops, consisting of 204 gold ring events which attracted a record-total of 71,691 entries – the most ever in the history of the WSOP Circuit.

Circuit schedules are subject to change. Stops may be added or removed. For more information on individual circuit events, including event schedules and structure sheets, can be found at each property website or by visiting www.WSOP.com

*The WSOP Circuit Events and culminating championship are subject to tournament rules and restrictions to be released at a later date. The timing, number and location of events are subject to change and all applicable gaming regulations.

ABOUT THE WSOP The World Series of Poker (WSOP) is the largest, richest and most prestigious gaming event in the world awarding millions of dollars in prize money and the prestigious gold bracelet, globally recognized as the sport's top prize. Featuring a comprehensive slate of tournaments in every major poker variation, the WSOP is poker's longest running tournament in the world, dating back to 1970. In 2012, the event attracted 74,766 entrants from 105 different countries to the Rio in Las Vegas and awarded over $222 million in prize money. In addition, the WSOP has formed groundbreaking alliances in broadcasting, digital media and corporate sponsorships, while successfully expanding the brand internationally with the advent in 2007 of the World Series of Poker Europe. The WSOP Circuit Tour is entering its ninth season in 2012-13. For more information on the World Series of Poker, please visit www.WSOP.com.

ABOUT SOUTHERN COMFORT
Southern Comfort®, a fruit, spice, and whiskey flavored liqueur, was created in New Orleans by bartender M.W. Heron in 1874. Today, it is enjoyed by friends in over 100 countries around the world and continues to grow as an icon brand. Please visit us at SouthernComfort.com and facebook.com/southerncomfort.
Drinking Responsible Is Your Best Bet. Liqueur, 15-50% Alc. by Volume, Southern Comfort Company, Louisville, KY ©2012

ABOUT CAESARS ENTERTAINMENT CORPORATION
Caesars Entertainment Corporation is the world's most geographically diversified casino-entertainment company. Since its beginning in Reno, Nevada, more than 74 years ago, Caesars has grown through development of new resorts, expansions and acquisitions and now operates casinos on four continents. The company's resorts operate primarily under the Caesars®, Harrah's® and Horseshoe® brand names. Caesars also owns the World Series of Poker® and the London Clubs International family of casinos. Caesars is focused on building loyalty and value with its guests through a unique combination of great service, excellent products, unsurpassed distribution, operational excellence and technology leadership. We are committed to environmental sustainability and energy conservation and recognize the importance of being a responsible steward of the environment. For more information, please visit www.caesars.com.

This release includes “forward-looking statements” intended to qualify for the safe harbor from liability established by the Private Securities Litigation Reform Act of 1995. You can identify these statements by the fact that they do not relate strictly to historical or current facts. These statements contain words such as “may,” “will,” “project,” “might,” “expect,” “believe,” “anticipate,” “intend,” “could,” “would,” “estimate,” “continue” or “pursue,” or the negative or other variations thereof or comparable terminology. In particular, they include statements relating to, among other things, future actions, strategies, future performance, and the outcomes of contingencies of Caesars Entertainment and the WSOP Circuit Events. These forward-looking statements are based on current expectations and projections about future events.
Investors are cautioned that forward-looking statements are not guarantees of future events or results and involve risks and uncertainties that cannot be predicted or quantified and, consequently, the actual events described herein may differ materially from those expressed or implied by such forward-looking statements. Such risks and uncertainties include, but are not limited to, the following factors:
• our ability to secure all of the locations of the WSOP Circuit Events and the time and place of such events;
• rules and regulations of the gaming and other regulatory agencies that govern the WSOP Circuit Events; and
• our ability to secure a party to produce and televise the WSOP Circuit Events, and or the National Championship. 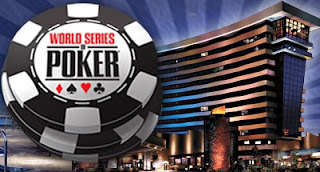 Poker’s top brass will set up shop in Durant, Oklahoma at Choctaw Casino Resort January 5th through 23rd for the WSOP Circuit’s second stop of 2012.

When looking to describe the 2011-2012 Circuit so far, one could start with the phrase, record breaking.

With the bar set high, great things are sure to come from Choctaw and what is typically one of the Circuit’s largest stops due to its close proximity to the Dallas market.

Last year, almost 4,700 players turned out for 10 ring events and their chance at a piece of the over $2.6 million in awarded prizes. The Main Event champion, Huy Nguyen, bested 808 entrants and was awarded $233,000 for his victory.

Both the Main Event champion and the Casino Champion will be awarded seats to the $1,000,000 Circuit National Championship in Las Vegas.

Tournaments will be ran according to standardized WSOP Circuit structures and all play will be overseen by tournament director Jimmy Sommerfeld and the Poker Tournament Consultants team in concert with Ken Lambert, Choctaw’s top poker lieutenant.

A full schedule of events can be seen HERE.

Rooms in Choctaw’s Grand Tower are available for as low as $79 a night. More information can be found HERE.

All final tables will be streamed live on WSOP.com.