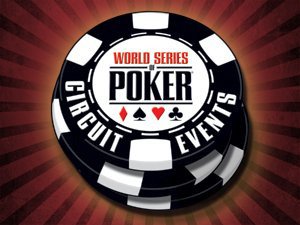 The World Series of Poker is the world's richest sporting event. Last year, the WSOP competition in Las Vegas alone awarded nearly $170 million in prize money to winners - more than Wimbledon, the Masters, and the Kentucky Derby combined. Five years ago, the WSOP hit the road for the first time in history. Poker tournaments were offered at multiple Harrah's properties spread throughout the United States. Rincon was one of the first casinos ever to host a WSOP-related event held outside of Las Vegas. Turnout has been strong every year, making Rincon one of the Circuit's most popular attractions.

This year's action-packed schedule includes 12 major daily tournaments, plus ten more late afternoon tournaments - bringing the combined menu to 22 total tournaments. This makes the upcoming Rincon series one of the busiest poker destinations of the season. In addition, the Rincon Poker Room will offer multiple satellites and around-the-clock cash-game action.

The Harrah's Rincon Casino and Resort is nestled in a quiet valley between the mountains 45-miles northeast of San Diego. Rincon, which has multiple dining, entertainment, and spa/fitness options for guests of all ages, is a convenient destination for poker enthusiasts throughout Southern California. In years past, Rincon's WSOP Circuit tournaments have attracted thousands of poker players with all levels of experience, from recreational competitors to world champions. Former WSOP champions Doyle Brunson, Chris "Jesus" Ferguson, Greg "Fossilman" Raymer, and Jerry Yang have attended in recent years. Rincon has also been visited by other poker greats, including Phil Ivey, Daniel Negreanu, Berry Greenstein, Phil Gordon, Chris Moneymaker, Annie Duke, Howard Lederer, Scotty Nguyen and many other superstars.

This year's poker tournament schedule includes a wide variety of poker games, including Limit Hold'em, No-Limit Hold'em, Pot-Limit Hold'em, Omaha High-Low, Seven-Card Stud High-Low, and H.O.R.S.E. In addition, there will be a ladies-only poker tournament and a special tournament for seniors. Tournament buy-ins start as low as $125. The Rincon championship event will be played on the final three days of the series (March 30th through April 1st) and will cost $5,150 to enter. Super-satellites for the championship event costing as little as $65 will be held daily, 24-hours a day.

"Harrah's Rincon is proud to be a fixture on the World Series of Poker Circuit," said Robert Livingston, Vice President & Assistant General Manager at Harrah's Rincon. "I know all our casino and hotel employees look forward to the excitement of this big-time tournament coming to Southern California. This year, we really intend to roll out the red carpet for everyone, whether they just want to play a little poker for fun or strive to become a world champion."

This year's tournament director is Jimmy Sommerfeld, one of poker's most respected and experienced gaming officials. The Harrah's Rincon poker room manager is Alexia Alsop, who will be working with her staff to coordinate San Diego's premier poker event. Additional staffing will be provided by the elite and prestigious Poker Tournament Consultants group.

Rincon is also providing special luxury hotel accommodations to poker players for as low as $81 per night. In addition, entrants who purchase a tournament buy-in $500 and greater will receive a $15 food coupon which can be used at several casino restaurants.

Winner of the 2007 SHRM Workplace Excellence Award (Marble Award in the Large Company category) and owned by the Rincon San Luiseno Band of Mission Indians and managed by HCAL, a subsidiary of Harrah's Operating Company, Harrah's Rincon Casino & Resort is located at 777 Harrah's Rincon Way (33750 Valley Center Road) in Valley Center, CA, 20 minutes northeast of Escondido. With approximately 1,600 employees and an identity as a top resort-gaming destination, the casino offers state-of-the-art amenities and the unparalleled customer service that has made Harrah's a nationally recognized brand.

* World Series of Poker and WSOP are trademarks of Harrah's License Company, LLC ("Harrah's"). Harrah's does not sponsor or endorse, and is not associated or affiliated with, This and That or its products, services, promotions or tournaments.


Oklahoma - (February 23, 2009) by Deanna Goodson – Jimmy Sommerfeld is the Tournament Director of the 2009 Oklahoma State Championships of Poker. A major player in the world of tournament directing, Sommerfeld works with Poker Tournament Consultants, a group dedicated to being “the industry leader in the coordinating, directing, and executing of the most prestigious poker tournaments worldwide.”

...Recently, he squeezed in a few moments with us to discuss not only his background and Poker Tournament Consultants but also to share his passion for poker.